What do termites look like? Tips for identifying termites in Florida

Home / What do termites look like? Tips for identifying termites in Florida

What do termites look like? Tips for identifying termites in Florida 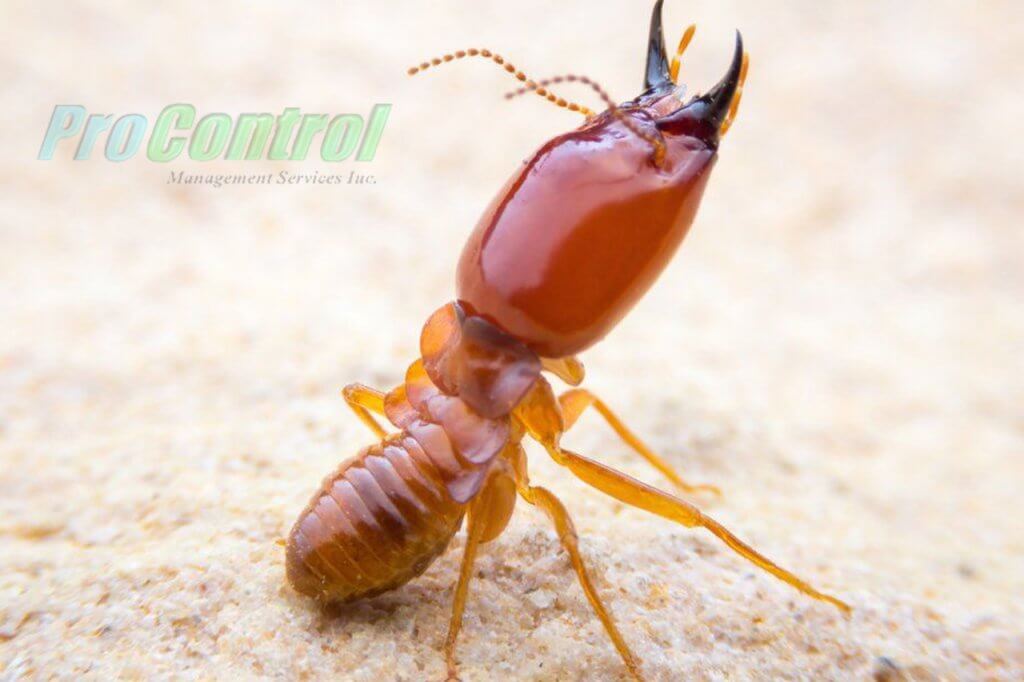 A typical portrait of a termite is a pale yellow or white small insect, with a brown head and strong mandibles. It’s a pretty annoying insect. Its presence must be always reported to professionals as soon as detected. It causes so much damage, and at a very high speed.

Termites do not like solitude and live in a society like ants. They organize themselves in a very efficient way among themselves. Together, they cause significant damage to buildings. They degrade wood, as well as its derivatives used in construction. Anything containing cellulose is a feast for these insects with an insatiable appetite.

These insects attack undercover. They dig into the wood from the inside, on the sly. As a result, the wood weakens and can no longer play its supporting role. In the most extreme cases, this nibbling can lead to the collapse of floors and buildings.

In this article, you will discover how to identify termites in Florida. This state of the United States is particularly affected. Some species of termites are more important than others. Read on to learn more about each of them so that you can best respond to a potential infestation.

What Are The Most Common Types Of Termites In Florida?

There are many different types of termites, but they all share some properties. Termites are very efficient in what they do. It can be a real hassle to work your way through them. Especially if you don’t recognize any early signs of their presence.

Termites will chew through any type of deadwood. Whether this was a fallen dead tree in the forest, an old stump, or your wooden ceiling or floor – they love it all. Because of this, it’s very important to make sure not to ignore any possible early signs of their presence. You will then have a much higher chance of getting rid of this infestation if you detect them soon enough.

If you do not, the termite swarmers will create many nests around your house. This will make it even more difficult to deal with them in a proper way. You might hear them chewing through the wood before you actually see them. Make sure to check out the spots they like the most:

Hotter seasons denote the start of termites swarms for property holders. Florida’s hot and damp atmosphere is perfect for a few types of ants and termites. Also, our homes are in danger a lot prior in the year than in different locales. Florida is home to three principle sorts of termites

There are a few key contrasts among these three sorts of termites, including:

Underground termites are the real miners of the termite world. It’s the most common species in Florida.

Most termites in Florida indeed live in underground colonies, not in nests or mounds. The main material used by termites for nesting is their feces. The properties of termites’ droppings make them perfect for this character. The nests of termites are often built also from digested plant material.  And soil, which is often used as a building material in underground nests. Not all termite nests are visible at first sight. Especially in tropical forests, many nests are underground.

Termites in the house as well as in facilities can cause considerable damage. Especially to unprotected buildings and wooden structures. Their habit of hiding often results in their presence not being always detected. This is until the wood is very damaged.

Termite attacks on living plants most often occur during drought. Termites cause serious economic damage. Termites can damage many species of plants including:

Of the three kinds of termites found in Florida, damp-wood termites are the biggest in size. These termites need to have contact with water. They invade wood with high dampness concentration.

Most of them are blind. Communication between termites usually takes place through chemicals called pheromones. They communicate with each other by means of many types of pheromones, including:

Mounds are elaborate structures. They are well designed to protect the kingdom from predators. They also provide the right temperature and humidity. These parameters are all maintained in the mounds at almost constant values. Regardless of external conditions. Nests can be in the form of a mound, even several meters high. Other nests are all built inside the wood.

Those names probably don’t mean anything to you. But talk to farmers, market gardeners, foresters, and you will see their hair standing up. There’s no limit to their voraciousness. And they cause considerable damage to the houses, crops, and trees they attack. They cost mortgage holders $1 billion yearly in

Hidden in wooden crates in GI’s returning from Japan at the end of World War II, these termites established themselves in the United States. They are very attracted to wooden houses. The Formosan termites gnaw at them to the point where buildings collapse. A single colony can be 100 feet long.

What makes these termites so hazardous is their capacity to replicate fast. Their colonies can stretch to millions of members. They develop a settlement of 30 grams of wood in 24 hours. While Formosan termites live on wood, they can use their solid jaws to bite through other materials. This includes:

There are such huge numbers of similitudes among the various sorts of termites. Florida termite identification can thus be a precarious task for property holders.

Winged termites have two pairs of faceted eyes and two straight eyes. They are now distinguished from others by the presence of wings? After the settled summer the insect breaks off along a special seam. The wings may be large but they are weak. Winged termites can associate and multiply. Workers and soldiers don’t have this possibility because they lack sex glands.

Winged princes and princesses can replace a dead king or queen. In summer they are far from the air currents and form colonies away from their termite mound. The royal people manage everything by themselves:

But as soon as the children grow up and are all divided into soldier termites and workers, they look after their parents.

The foundation of the state starts with a swarm. The winged forms take a mating flight from the mound. After landing, they destroy their wings, merge into pairs and wander on foot in search of a place for a new seat. In the chosen place the couple mate, after which the female queen lays her first eggs. The parents feed the hatched larvae, then the cubs start to build a nest and feed and nurture the king and queen.

Then the king and queen are only reproductive termites. The queen can lay many millions of eggs during her lifetime. The development of the larvae takes place with an incomplete transformation. Full development lasts several months, during which the larvae line up several times. It is only after the third molting that the caste traits become clear. It is now assumed that the caste is dependent on the nutrients given.

Spring is the usual time for a termite swarm. And this is when they tend to reproduce and grow beyond comprehension. Using wood as their main source of nutrients, they can:

Spring is a good time for them to expand since the entire environment is warm and humid. These are the two main requirements for termites to grow. Keep in mind that the natural task for termites is to feed on dead or dying vegetation. This makes them good waste managers. Unfortunately, our homes are often built out of deadwood. This is why termites tend to infest these as well.

Termite Season: Florida And Beyond

Termites usually begin to swarm in the early days of spring, when the weather is warm and after a good rainfall. Termite season in Florida can often start sooner than spring. This is because its climate is warm and wet year-round.

Termites use environmental signals. This includes the signal to begin swarming. It also includes synchronization with other termite colonies of the same species. This is to ensure that the possibility of inbreeding is very much reduced.

The time of day when termite swarms take place depends on the termite species. The majority of yellow-footed termites swarm during the day. Formosan termites swarm at night. Winged termites are very attracted to light sources. This even includes street lamps! They can be thus spotted around those spots.

Termites are not confident about their flight. They generally rely on the wind to help them move through the air. For this reason, termite swarms do not last long. But if the wind is strong, the future king and queen of termites often travel a long way. They do it before starting the process of starting a new colony.

There is a lot you can do to prevent the all-mighty swarm capturing your home. The first decisions come way before you even start working on your house. Professional pest control companies usually treat the base of the structure. They use a specific toxic substance. The latter can annihilate or at least repel any incoming swarms. This is a good protection measure that can hold off any infestations for up to 5 years with no problems.

Another important rule for avoiding swarms is to never put pure wood in contact with the soil. Using metal or concrete base instead might be enough for termites to miss the wood. That way, you will prevent any mishaps from happening.

In case you do get an inside termite issue, it’s time to call professional help. There is no easy way of getting the termites out of your home once they nest in it.

Termites are well known as one of the most resistant insects on the planet. They can live off pure wood and nothing else. They hide in wood and are working together for a common cause. All these characteristics make termites quite a worthy opponent. Once they try to digest your entire home structure and it’s important to understand that they won’t go on their own. Depending on how nasty your infestation is, you will need to hire professionals to do this for you.

These insects are restless and you might get tired fighting them alone. If you haven’t dealt with termites before, you don’t know how much of a hassle these insects can be. Especially due to their recurring nature. They will stay and nest in hidden areas where they have a safe stash of food. You’d be very surprised at how well they can hide! Also, termites usually establish a couple of nests around the house. This makes it even more difficult to track them all down. With professional aid, you will get the best value for your time. There is a lot of experience needed to get rid of this problem once and for all.

With this in mind, it gets to the point where you realize how important it is to find a reputable company. ProControl has a history of satisfied customers.

As pioneers in termite control, we will make a precise conclusion of the issue. Afterward, we build up a powerful arrangement to wipe out termites from your property. We can likewise set up yearly termite reviews. Get in touch with ProControl Services today!